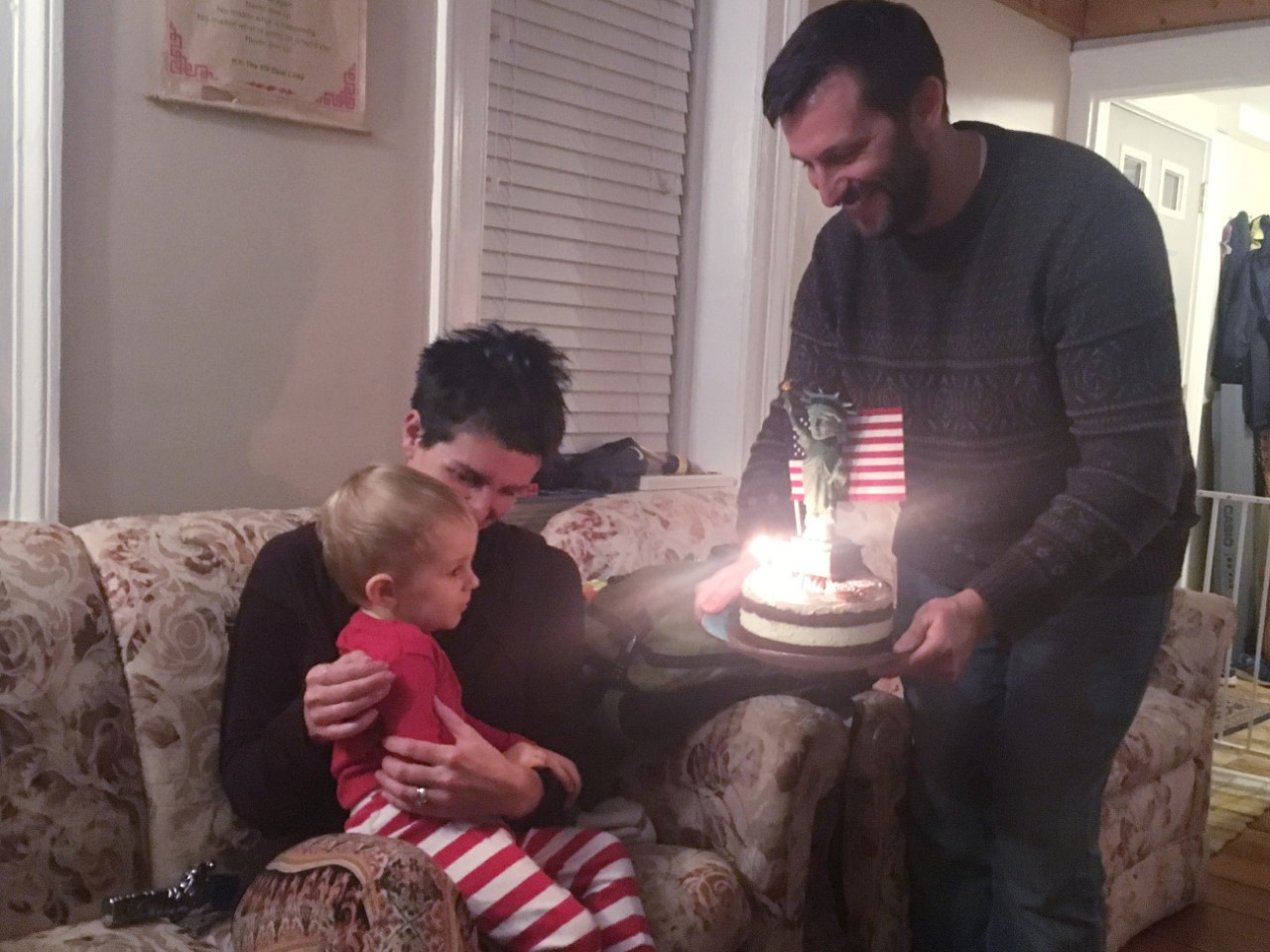 Most of you know that I am originally a foreigner. You can probably tell right away, because you hear my accent. Today, I can say that I am not a foreigner. I am an American citizen. My naturalization happened 3 weeks ago on January 15th, 2019, but I was a foreigner back then. For 15 years I was here on all sorts of different visas and with a Green Card until the recent ceremony, where I gave my oath of allegiance to the US and I promised to support and defend the Constitution. Now I am one of you. Nevertheless, it has been a long journey, let me tell you.

Many people have asked how I ended up in the States, so if you want to know and you have some extra time and curiosity, keep on reading.

I was a young traveler, exploring the world, who was interested mainly in the exotic Third World countries. In the year 2004, I settled for a few months in Prague, putting together some travel material from Africa and preparing myself for a tour-guiding trip through Sub-Saharan Africa. One of the tours was cancelled and I had a few months to hang until the next tour. It was late Fall and there was not much to do. I mean, there was nothing exciting which would keep me there.

At that time, a couple of Czech friends living in the Boston area invited me over to visit, saying that their gorgeous place is worth seeing. Since I had nothing to do for 3 months, I applied for an American travel visa and flew over, totally open, with no plans at all.

I can assure you, I was never ever attracted to the US. Never. Honestly, I had this narrow-minded idea about the States, knowing the US only from movies, which consisted of LA, New York City and some Mid-West landscape with cowboys. And that had nothing to do with my exotic adventures, which I was all about. So, after I arrived, I was quite surprised by the truly beautiful (and different compared to my expectations) place called Cape Ann. Yet, it was also pretty cold, since I arrived in December.

The story flipped around = inner hurricane:

It was fun to hang around for few days, but the storm hit us soon after. We got some strong winter storm outside, with an inner hurricane. The two friends (two Czech women) who invited me over were going through a relationship separation and I got somewhat in the middle of their arguments. Besides that, one of them believed that the new romantic partner for her was going to be me. Oops! The other woman got naturally jealous. Energy amongst us became so intense that I decided to move away. Yet, we agreed that we will remain friends.

That “hurricane” happened after 3 weeks in the US. The thought of flying back to the Czech Republic for me was not acceptable. After I got to the States and didn’t see anything except the snow and some crazy friends with a relationship drama… I was not quite done. I thought that there must be more than just this and I decided to surrender to these conditions here and keep on looking for some direction.

The Universe was on my side, supporting my decision to stay longer. I met a lovely woman who needed a babysitter and as I told her I am looking for a place to stay, she invited me to stay in her house.  Meanwhile, I had to cut myself from these two women which turned out to be quite dark and toxic, even though they practiced wellness/healing modalities. It was an interesting moment, when I found myself alone in a foreign country, not knowing why I was here, but literally persecuted by those two Czechs, who were pushing other people against me.

At this point I became very anxious and kept carrying this anxiety for a long time. It was this type of old ancient fear, which we carry in our genes. Like the fear of being abandoned by the tribe where you live, abandoned in shame, and left alone to die. After all, I was alone, in a foreign country, with no family nor friends, no work, but some nasty gossiping forces of two Czech girls.

However, there was a beautiful lesson for me – To Trust Who I AM. I started using positive affirmations the whole day long, whole weeks – non-stop until the hard times passed. Interestingly, those girls moved back to Czech a few months later, and I moved to western Massachusetts to become part of an international non-profit organization called IICD (International Institute for Cooperation and Development), that prepared volunteers for humanitarian work in Third World countries. I finally had a place to present my material from Africa. Here, for a while, I thought that I had found my purpose.

The journey through Africa and back to the States:

This was not any easier than my first 3 weeks in Cape Ann. The program itself didn’t support my vision, so I was not too happy. After a few months I left with two other volunteers for Mozambique, to work in the HIV/Aids project. African experience and volunteer work was not new for me, yet I decided to repeat this already familiar experience.

After Mozambique, our little team returned back to the States and I decided to come back to Cape Ann.
While fundraising for Africa, I found a nice community on Cape Ann, and I decided this is a good place to go to a college and figure out my life. I was in a relationship with a foreign guy and we wanted to stay together, as well as to live legally in the US. We applied at Salem State University and were approved as international students. I went on to study Geography and Travel, since I felt like this was the best field to help me to pursue my dream – my adventurous spirit seeking exploration.
Not knowing how I will manage to handle full-time studies and how I will support myself, I decided to trust and keep on looking for best way to self-support.

I was of course very happy that I became a student, got my student visa and lived with my international boyfriend. However, the years at the college were very hard. I was attending afternoon classes, and I had to pay the tuition and all living expenses. After getting my SSN through the school I could work, but only 20 hours a week. The positive side of my chosen studies were my paid seasonal tour-guiding internships. I got to explore the west coast of the US and its beautiful nature. And finally, I got my tour in Sub-Saharan Africa. It was all credited and paid. Win-win.

Nevertheless, the student life was hard to the point that I felt like I should quit. I was living a very anxious life, unsure of how I will make it through the studies and worried about my family in the Czech Republic. I always visited them at least once a year, but I was away from my sick father who I couldn’t help. Worse yet, I was also away from my beloved nephews who meant everything to me. This was the hardest thing of all – being separated from my loved ones by a geographic distance.

Before the end of my studies, my boyfriend and companion quit all his effort and went back to his home country and ended our relationship. I stayed and finished my studies, and I graduated with a Bachelor of Science in Geography and Tourism one year later.

My career turned out to be different than I thought:

I have been practicing different alternative techniques since I was 17 years old, and it was all for the curiosity of self-exploration. Here in the States in 2006, I became a Reiki Master/Teacher and added some more healing work/studies, such as Quantum Healing. I also started my healing practice, offering healing modalities to the public. It was mainly started as a hobby. I didn’t plan to run a wellness healing practice as my main occupation. I had the healing practice for my myself as a self-help.

Most importantly, I always felt sympathy for other people and wanted to help everyone to be happier and healthier. My Reiki Master was telling me that I should consider practicing energy healing as a business, but I just laughed and didn’t think of it seriously. Mainly, I didn’t think that I was good enough to do this work. I also dreamed of this sparkly adventurous life, where I would be traveling and exploring the world.

Today I understand where the problem was: I was not anchored. I found and developed a spiritual ground, but I was missing so much on the practical level. Of course, I was still a foreigner living a hard life in the land of opportunities, where nothing was for free.

Then I met my lovely husband, created a home and was blessed with a beautiful child. We live in the same beautiful town where I had arrived 15 years ago, not knowing why, but knowing that I should find out why. The life loves me.

What I didn’t tell you yet, is that I have been running my healing practice because my husband pushed me. Initially, I was resistant and found different excuses to slow down or take it lightly. I have always seen a purpose in this work but had no confidence to go fully into it. I also know that my need to help others is a need to feel better, and that needs to start with me too. So here I am, doing my work.

I am a practical person:

Most people have no idea how hard is to become a US citizen. I got my citizenship after 15 years. Went from a Travel visa to Student visa, from Student visa to Work permit, from Work permit to Green Card.  Then there was a Green Card extension, more tests and paperwork, and after all of that I am finally a US citizen.

I can vote. I am grounded and rooted into this soil. Do I feel less anxious? Yes, I think I am doing better. I have my family which I love, and which gives me joy. I have my work which I love, and in my sessions and classes I give suggestions to help other people create a more peaceful and joyful life.

Yes, I know the world is a tough place. The US in the current time, instead being a proud land of opportunity, is a hostile country that is unfriendly to foreigners and other people in need. There is a lot of greed and pain. But we can’t give up on this country.

I just want to say that I still have my hopes in humanity. I can see that people in the world are awakening and realizing that they have to be responsible for their lives and for this planet, and that we are in the process of creating a more sustainable and peaceful life.