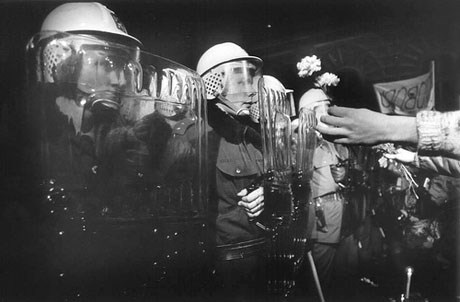 One event in Czech history affects me to this day, even though it happened almost 30 years ago.  Today is the 28-year anniversary of the Velvet Revolution, an amazing event which caused the collapse of the totalitarian regime in today’s Czech Republic (at that time it was Czechoslovakia).

Life Behind the Iron Curtain

I was a young kid who understood life behind the Iron Curtain.  As a child of a political dissident, I was suffering my father’s consequences.  I was told that I had no future, and that I was not going to be able to study at good schools.  I would certainly not be allowed to travel abroad.  At that time, the whole country was oppressed in terms of free speech, self-expression and religion.  We were forced to follow socialist propaganda since 1968, when the Soviet army invaded Czechoslovakia and closed the borders.  It was a heavy regime and its opponents were persecuted.  I felt like there was no hope for a better future, but I only knew this way of life and no other.  Foreign magazines showed cultures free of socialism, so I thought there may be a better life elsewhere.

Everything changed on November 17th, 1989, when students and artists gathered in the center of Prague, giving honor to a student who burned himself (in 1968) as a protest against the regime.  The honor was a peaceful candle light demonstration and singing.  The demonstration was absolutely astonishing.  Protests were broadcast on national TV, despite the previous regime’s norm to censor opposition.  Armed police attacked and beat the protestors, yet the crowd of young people responded with flower offerings and peaceful songs.  No one was killed, so this event was named the Velvet Revolution.

The Berlin Wall fell a week earlier in Germany, so one could say this was a catalyst for the Velvet Revolution.  It was shocking that the fall of the Berlin Wall was real, but it was equally surprising that the events made it on to national television.  The next event was the Velvet Revolution in Prague.  After Prague, protests continued through the rest of Czechoslovakia and spread to neighboring countries such as Poland, Hungary, and East Germany.

By New Year’s Day in 1990, Czechoslovakia got a new president, Vaclav Havel. The crowds were singing peace songs, celebrating freedom and new life.  The next year, Czech and Slovakia split apart, peacefully.  Two presidents of Czech and Slovakia shook their hands, and everyone went their own way.  No blood, no hard feelings.

It was such a positive and miraculous event which brought so much light to the Central Europe and the Eastern Block.  For those of you who aren’t European, I call Czechoslovakia Central Europe because it is just in the center if you look at it closely.  Every time I talk to people about Velvet Revolution, I end up with tears in my eyes.  I can’t help the emotions that I feel about it.

Why am I telling you this story?  Well, this is something unique to share to have hope.  The world can be a dark place, and it is even darker if you spend the day watching the daily news and get entertained by the negativity that our media feeds us with.  Even though there is a lot of negativity, I have a hope for humanity.  This story I told you is for real.  I have lived through it and I celebrated that.  Miraculous events in the world can happen.  This was a domino effect of peace and love in a large part of the world.

Here is a song which became a symbol of the national resistance.  It reminds us of the Velvet Revolution.

A Prayer of Martha

Cloud flows slowly away from sky
and everybody reaps what he has sown,
let my prayer speak
to hearts not burnt by the time of wrath,
like flowers by frost, like frost.